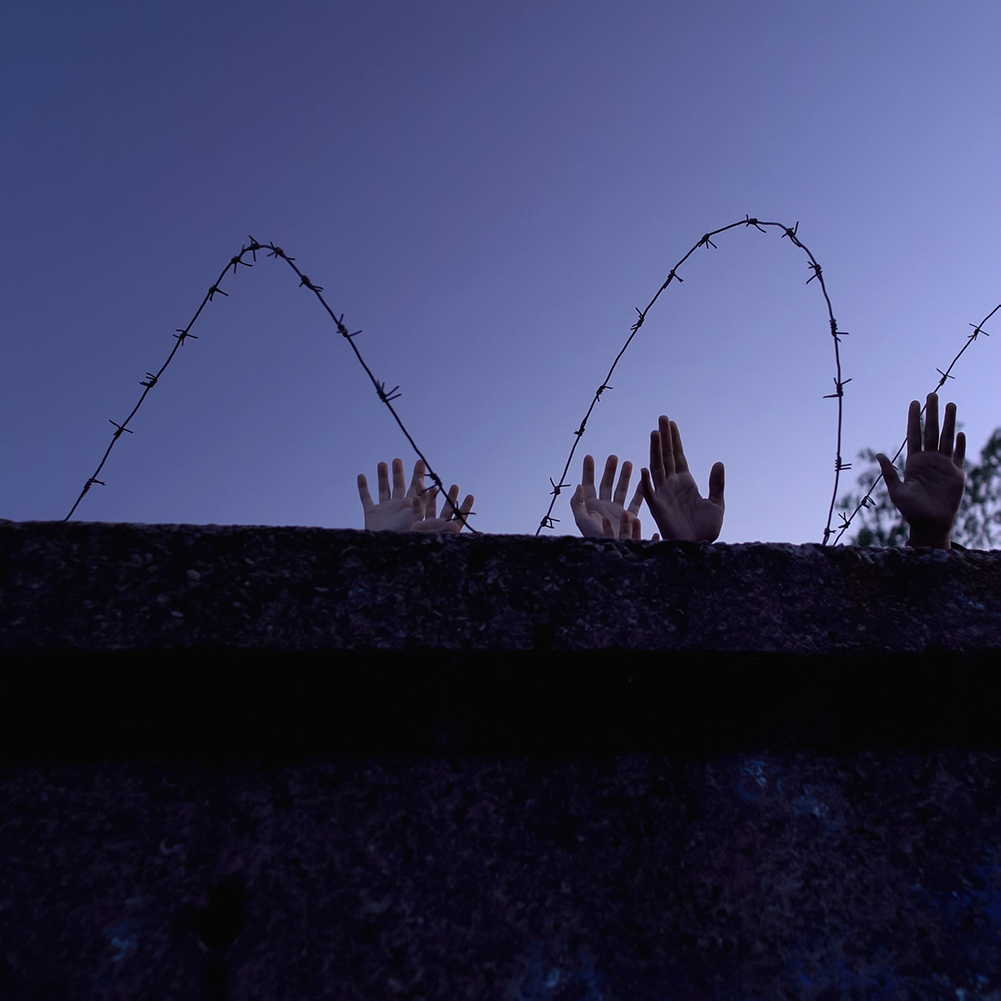 Sacniete, 36, was born in a village along the Mayan border with New Spain. Her family had lived in the town for nearly a hundred years, part of the culture in the area that stretched back almost 4,600 years.

“We fled when the quadrocopters started flying in,” she says, “But most of my family, most of my village, they stayed. Our elders didn’t believe the Spaniards would come, but they did.”

Her village, say experts, is now the location of a sprawling forced labour and reeducation camp. The Neo Spaniards tore down her home. Her family and friends are missing, and many are presumed dead.

Since New Spain invaded the Mayan Kingdom’s northwest corner five years ago, a systematic culling has been taking place, unlike anything the world has seen before.

“They are exterminating the culture, exploiting the people for their labour, and systematically raping women. It is designed to propagate a perpetual servant underclass of children who have never known their rightful culture,” says Professor Tyee Wekell of Wimahl University. “This kind of thing has been a hallmark of Neo-Spaniard culture since the destruction of the Aztec Empire five hundred years ago, but it was always ad-hoc. Now, it’s organized, industrialized. Now the scale is greater than the story of one person or one village. It’s an entire group of people.”

New reports indicate that this process has entered a new phase in recent months.

“People are used to hearing about the conditions in the refugee camps that have sprung up in the Mayan Kingdom as people fled the invasion five years ago, but we haven’t heard much in the press about this. That’s partly by design,” continues Wekell, “New Spain has very tight press controls and early on expelled foreign reporters. Until recently, the world knew very little of the scope of what is taking place.”

Now, of course, the world is starting to wake up to what is happening. It’s believed that this was the impetus for West Africa’s renewal of their trade embargo against New Spain—something that came as a surprise to many forecasters.

“I think when the West African’s realized what was going on, they couldn’t open trade up again in good conscience,” says Barkeley Timut, an economist at The Venetian. “Other regional powers have their economies tied to New Spain in ways that a behemoth like West Africa doesn’t. Even though the hearts of the Chorotegans or Miskitos might be with the Mayans, they rely on New Spain to buy their exports of bananas, mangoes and textiles. Their ability to put economic pressure on Spain is non-existent.”

This economic imbalance is why it’s imperative for Cascadia, Louisiana, and most of all, the Empire of Australia to keep up the pressure.

“The Empire’s presence in the region is active, but not overwhelming,” says Cody Zial, an Empire watcher at the think tank New Global Strategies. “Yes, Australia has imposed a blockade against them, but it’s mainly successful in obstructing trade of large items of the type that come in on container ships. The Spaniards still run exports to the Union and imports from Central America.”

This circumstance has left Spain with slight supply chain issues, but not the significant disruptions that would cripple its economy and bring it to the negotiating table.

Many believe that the kind of economic pain necessary to stop an entire race’s extermination would take resources that even a global superpower like Australia would have difficulty mustering.

According to Zial: “You need not just the big warships but a presence along the coasts and inlets to ensure that smugglers are not able to function. And, ultimately, rolling back the Spaniards is going to require boots on the ground. It’s hard to imagine anything like that without a coalition of multiple coordinated armed forces.”

Such an action would need to be led by one of the big players. Australia is the most likely candidate.

“My colleagues at NGS argue that unilateral action from Australia is unlikely. In the face of E33’s ‘new deal’ policies,” says Zial referring to Eleanor XXXIII, the current reigning Empress of Australia, “She’s deliberately talked about how Australia needs to work differently with the world and not impose its will on others by force.”

After all, Australia just retasked its Foreign Legion with wildlife protection operations in Africa. That’s not the move of a government that is getting ready to deploy a massive force to an effort to control a rogue government.

Does this leave a place for Cascadia to engage more proactively and assertively with the world?

“I think it does,” says Zial, “Nathan Chambers has made it the cornerstone of his platform of Cascadia Ascendant to engage with the world assertively. I don’t see leadership from Louisiana or New England on this issue. Despite its economic moves, Africa is focusing on Africa. I think if something is going to happen, it will be Cascadia that has to lead it. Will this be Chamber’s moment? I guess only he can answer that question.”

Others worry that Chambers, nearing the end of his first leadership term will opt for the safer path.

“He’s not going to get involved,” says Julia Wilde of the Policy Research Institute. “We’re talking about a massive peacekeeping mission. You’d need 50,000 troops on the ground at least and a massive infusion of capital to rebuild. There are hundreds of thousands of refugees. Honestly, this is a loser of an issue, politically speaking. Nobody wants to go in. Nobody wants an extended occupation, and you’d be looking at ten-years, minimum to get it done. This situation is political quicksand with zero upsides, except for the humanitarian aspects. I hate to be a pessimist, but there’s never been a humanitarian intervention on this scale for a reason. Nobody wants it.”

For Cascadia, for the world, this could be a big moment: putting so much on the line for purely humanitarian goals would be a huge step forward toward building a better world, but, for those in power, the price may be too steep.

Sacniete, cradling her young child as she sleeps in her arms, the future looks bleak.

“I don’t know if I’ll ever see my homeland again. My house is gone. My family is probably dead. I’m scared that this will be my life now, the life of my child. I think about my ancestors and the life that they lived. How quiet and wonderful it must have been. I long for those old days. I wish my child could see them, but I doubt they ever will.”

What Really Happened to Jasper Taylor?