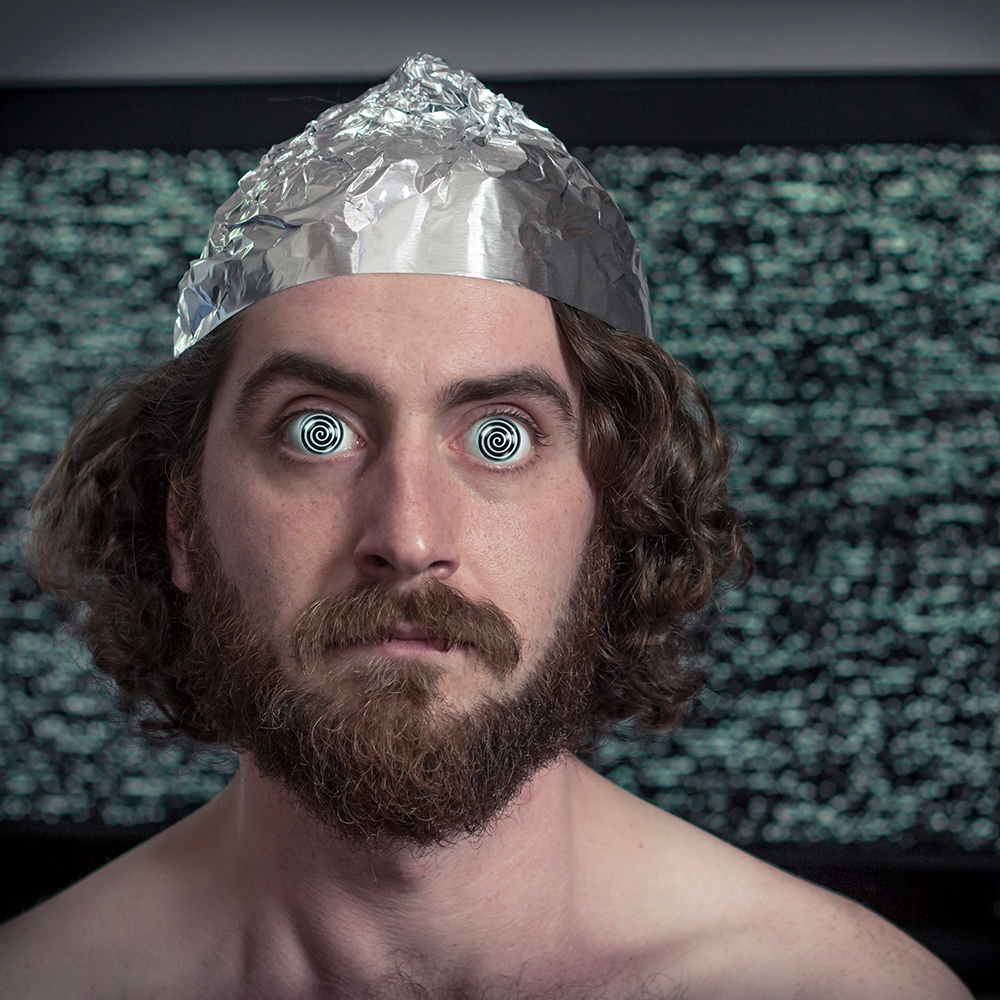 When Farren Radler wakes up every morning he adjusts his tin-foil hat.

"I toss and turn in my sleep. I haven't gotten a good night's rest in well... it's been years," he told me on a Sunday afternoon in his shuttered apartment, walls lined with tin foil, "But when I sleep I knock the tin-foil loose and it's then that they can read my thoughts."

"Who," I asked, genuinely interested in learning the source of his restlessness.

"The visitors," he replied matter-of-factly, "If I don't wear this they can hear my thoughts and sometimes they even tell me things, but the tin blocks their communications. They communicate at about 3 megayules and tin blocks that frequency."

Farren Radler is hardly alone in his beliefs.

The last several years have seen a steady rise in Cascadian paranoia. Psychological journals are awash with articles analyzing cases and offering solutions. The Wimahl Psychiatric Institute is adding another wing to its already sprawling campus. The Cascadian airwaves that once held up Joe Franklin as its only Denizen of the Paranoid Paranormal now is positively crowded with similar shows all purporting to reveal the truth about vast conspiracies, underground movements, secret visitors, and unusual phenomena.

It may prompt our readers to rightly wonder just what the hell is going on—if they haven't already absconded to their bunker.

Many trace the new-found paranoia to the incidents of the 2014 Outbreak of Pørtland Idiopathic Respiratory Disease. An illness that appears out of nowhere to kill over 100,000 is sure to raise people's cortisol levels.

Oana Klondike, a researcher at the Cascadian Ministry of Health which has measured cortisol levels in a random sampling of Cascadians since 2001, has seen a spike.

"It's like a 30% jump after 2014," says Dr. Klondike, "It's tapered off some since a peak in October 2014, but it's still about 25% higher than what we thought of as our normal baseline in the decade-plus since we started measuring this stuff. Kind of blows your mind."

Cortisol is known in the common parlance as "the stress hormone" and its a big part of people's fight-or-flight response to outside stimuli—or an active imagination.

"We're seeing adrenal fatigue at record levels," continued Dr. Klondike, "The human body can cope with high cortisol levels for a short period of time, but extended fear-reactions can compromise everything from immune function to higher cognition. It would sort of be like being drunk all the time—the sorts of decisions you might make would be, well, not the best, that's for sure."

Paranoia, then, is turning us into brain-dead basketcases.

It Starts Based in Reality

Cortisol is responsible, possibly more than any other hormone, for our continued existence on what is actually a very dangerous planet. There are lions, tigers, and bears—all happy to make a meal out of a sleepy, lazy human being. There are bio-organisms like fungi, bacteria, and viruses—who are happy to take us down when they're not busy fighting each other. There's the earth itself with its swirling river eddies, spewing volcanoes, and sneaky waves—not to mention cliffs, falling rocks, lightning strikes and the thousand other ways the planet is trying to kill us every day.

Fear has played a big role in the ability for me to write this piece for you—and for you to be sitting wherever you are reading it.

And that's part of the problem.

Because our fears, and their related hormones, have done such a good job keeping us alive over the years our bodies are highly sensitive to them.

But our emotional brain hasn't evolved at the same speed as our other cognitive functions and so we find ourselves held hostage to primative urges and instincts that may not be the appropriate actions to take in what might be incredibly complex situations.

And so as bizarre, unexplained and dangerous things happen around us we naturally become responsive to fear and that response can create a vicious cycle, a kind of hormonal feedback loop that spirals us further and further, deeper and deeper into paranoid delusions.

Of course, that's the scientific explanation. Any paranoid will tell you that just because you're paranoid doesn't mean you're not rightly paranoid.

So was the secrecy about it from the company where the Outbreak started, Paralux.

So was (and still is) the fact that Toshe Marinos hasn't been seen publicly since the Outbreak.

Those are just the latest examples of what has been an extraordinarily weird historical rise to power for the world's richest corporation.

Many thought the heavy-handed response from Pørtland's Overborgmeister was weird.

So was the disagreement between the various branches of Cascadia's government about how to respond.

So was the fact that the disease appeared to resemble no other disease found anywhere in the world.

So was the fact that the lead researcher on the team which cured the disease, Klara Lassater, died under mysterious circumstances just months after the epidemic ended.

So was the fact that Klara's wife and fellow researcher Elizabeth Haver was found dead across town at almost the exact same moment.

Given all this weird reality it's no wonder that people are freaked out.

Preachers of the Paranoid

Joe Franklin left us for awhile, but it appears he may be bound for a comeback driven back into the spotlight by the resurgence of his audience's lust for his own mildly paranoid brand of independent investigative journalism.

Likewise, the airwaves of Cascadia have found new voices that daily and nightly offer promises to uncover the real truth, to ferret out the true secrets, and to warn us all of the multinefarious impending dooms awaiting us all—or some of us, anyway.

Cascadia, long a home of a plurality of religious beliefs, has seen the membership rolls of the more "Gloom and Doom" based religions soar as they offer explanations for what is happening. Perhaps most prominent among these is the Cult of Loki, whose adherents have interpreted many of the unusualities of late as signs of the impending return of their True God as his pet, man-eating wolf.

New groups, some financed by wealthy benefactors, have sprouted up. Prominent among these is Josephine Imre's group Purity which has landed on the ill of technology as the responsible party for all this weirdness. Purity's militant offshoot, Purity Control, may have been disavowed by Imre, but they still act in her name and more importantly with her paranoid belief system as the founding principle of their own.

The old phrase has new meaning for purveyors of doomsday supplies.

"My business has gone crazy," says Carl Craig, owner of DISASTER!, a local Pørtland survivalist supply store. "I have trouble keeping things in stock. I've sold more this quarter than I did in the entire year of 2012. It's been a banner year for me. I bought a boat. A really nice boat."

Sales of property abroad have also increased, an estate agent confirmed to me not long ago. Many of her clients are seeking warming locales in areas protected from the wider world by wide seas. Most popular it seems is the Kingdom of Hawaii, with its towering mountains and profound distance from anything else, make it at the top of the list of many would be survivalists looking to get away.

"International sales are great," the agent told me, "The commissions are double and usually the prices are steep. After all," she continued confidentially, "the gods aren't making land very fast these days."

Inside the World of President Romero